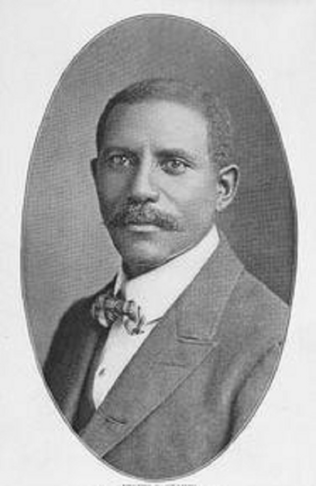 Junius George Groves was born into slavery in Green County, KY, on April 12, 1859. By age 48, Groves established himself as a millionaire farmer and landowner in Edwardsville, KS. In a 1900 Topeka newspaper article, Groves recounted his humble beginnings as a hired hand on a Kansas farm: “By keeping my eyes open, always attending to duty and doing more, rather than less, than was required of me, I soon succeeded in having my wages raised to 75 cents per day. This was considered a very fair price, and I felt that I was on the road to fortune.”

After the Civil War, thousands of emancipated slaves sought to leave the violence and oppression that faced African Americans in the Reconstruction South. An estimated 26,000 “Exodusters,” Groves among them, migrated to Kansas from 1879–1880 seeking freedom and economic independence through business and land ownership. Initially working for landowner farmer J. T. Williamson, Groves moved west to rural areas outside of Kansas City hoping to eventually own land and to farm. In 1880, when he was able to save money for the marriage license fees, he wed Matilda Stewart and together they sharecropped rented farmland growing white potatoes.

Over the next 28 years, Groves purchased property, eventually owning over 500 acres in the Kaw River valley, and successfully producing greater and greater potato crops, reputedly becoming the world’s largest grower of Irish potatoes. In 1900, Groves became a statewide celebrity when the Topeka State Journal newspaper declared him “the wealthiest Negro in Kansas, if not in the entire West.” By 1907, the “Negro Potato King” had an estimated wealth in the millions, in today’s dollars. He constructed a 22-room brick home for his family in Edwardsville, fitted with electric lights, telephones, and hot and cold running water. To accommodate his potato exports, which shipped around the United States and as far away as Mexico and Canada, the Union Pacific railroad built a spur line to his property. Some of Junius and Matilda’s 12 children attended Kansas Agricultural College and brought home and applied their science education to increase production on the family farm. Groves employed nearly 50 black and white hired hands on the farm. He also operated a general store in Edwardsville.

Groves invested in his community and state, establishing the Pleasant Hill Baptist Church Society in Edwardsville and co-founding the Kansas State Negro Business League, the Kaw Valley Potato Association, and the Sunflower State Agricultural Association. He created a golf course for African Americans who were shut out of segregated sporting venues. Groves divided and sold some of his property as small land tracts for purchase by African Americans.

The nationally known Groves was featured in educator and civil rights activist, Booker T. Washington’s 1904 journal article, “The Negro Potato King” and in his 1907 book, The Negro in Business. In 1925, Groves died in Edwardsville at age 66. He was later inducted into the Bruce R. Watkins Cultural Heritage Center Hall of Fame in Kansas City, MO.