H. Lee Scott, Jr. (“Lee”) was born in 1949 and raised in Baxter Springs, a town proudly proclaimed as the “First Cowtown in Kansas.” The son of a gas station owner, Lee graduated from Baxter Springs High School in 1967 and continued his education at Pittsburg State University in southeast Kansas.  It was during this time in Pittsburg that Lee would meet his future wife, Linda Aldridge, a native of Kansas City.  While attending Pittsburg State, Lee, Linda, and their infant son lived in the Lone Star Trailer Court, with Lee working at the McNally’s manufacturing plant and on campus in order to make ends meet.  It is this same, Kansas-born work ethic, drive, and dedication to core values that would serve Lee Scott so well later in his career.

After graduating from Pittsburg State in 1971 with a B.S. in Business, Lee gained employment in nearby Springdale, Arkansas with Yellow Freight, one of the most rapidly expanding freight companies in the country at that time.  As a salesperson and manager with Yellow Freight, Lee had his first encounter with Wal-Mart and David Glass, who would later become CEO of Wal-Mart and Chief Executive Officer of the Kansas City Royals.  Lee was sent by Yellow Freight to collect an upaid $7,000 invoice and was subsequently offered a job by Glass.  Staying true to his Kansas–born values of honesty and integrity, Lee responded to Glass by saying, “I may not be the smartest man who ever came into your office, but I’m not quitting a job with the fastest growing freight company in the nation to take a job with a company that can’t pay a $7,000 bill.”  Fortunately, Mr. Glass was persistent and repeated the offer two years later. This time, Lee accepted, beginning an illustrious 25-year career with Wal-Mart.

Lee Scott’s contributions to corporate development and improvement did not go unnoticed by Wal-Mart’s board.  In January of 2003, he was named President and CEO of Wal-Mart Stores, the largest company, by sales, in the history of the world.  Perhaps even more impressively, Lee was just the third person chosen to lead the company, following only founder Sam Walton and David Glass, the same man who years earlier could not pay Wal-Mart’s $7,000 bill but offered Lee a job.  As CEO, Lee made many contributions to corporate operations, human development, and environmental sustainability.  During Lee’s time as CEO, company-wide sales increased faster than inventory levels, a testament to his professional expertise and management skills. Although Wal-Mart experienced solid growth and profits throughout Lee’s tenure as CEO, his contributions to renewable energy usage, minimum wage growth, and environmental sustainability are what truly set him apart as a CEO, leader, and Kansan.  Evidence of this dedication to long-term sustainability is no more apparent than in his 2006 plan to invest $500 million dollars annually in technology to reduce greenhouse gas emissions at existing stores around the world by 20%.  This same plan, endorsed by former Vice President Al Gore and countless other business leaders, shows Lee’s focus on how the world’s largest retailer could make the world a better place.

Following his formal retirement in 2009, Lee Scott continued to use his success in business by giving back to the area that was so instrumental in laying the foundation for his illustrious career.  After Pittsburg State University received a $5 million donation from the Walton Foundation in honor of Lee’s dedication and service to Wal-Mart, the Scott family gave more than $2 million to create an endowment for the H. Lee Scott speaker series at Pitt State.  This series of special events, entitled “An Examination of American Life,” is designed to bring highly prominent leaders across the public sphere to Kansas and to enhance the experiences of students at Pittsburg State and across Southeast Kansas.  Standing on the stage of the Linda and Lee Scott Performance Hall in the fall of 2015, Lee personally introduced the inaugural speaker, former U.S. President Bill Clinton. This marked the first time that a former president had spoken at his alma mater.

In 2018, Scott received the Horatio Alger Award bestowed upon “admired leaders who have succeeded despite facing adversities, and who have remained committed to higher education and charitable efforts in their local communities”.

Lee Scott’s significant contributions, first through his corporate successes, and later, through his philanthropic generosity, have greatly benefited the people of Kansas and clearly show that he is an exemplary product of the Sunflower State. 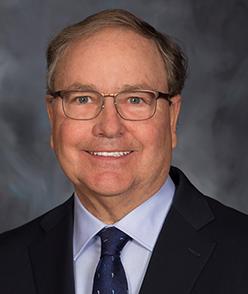