A.B. ‘Bob’ Hudson was born in Athens, Texas, on March 8, 1923, and moved to Kansas at the age of 7. Even from this early age, he worked with his brothers as a partner in Hudson Oil Company. When he received his first driver’s license at the age of 14, he began driving the business’ new trucks to help break them in. He became a partner in 1941, at the age of 17.

Hudson Oil expanded from being a business that only hauled gasoline and oil into one that started running gas stations. When the business was later sold to Koch Oil, Hudson began to create his own companies, Highway Oil, Workingman’s Friend and Fairway Oil, that operated chains of gas stations across much of the United States. He began working on his own companies in 1958.

Hudson eventually moved his office to Topeka to be closer to his ranch land. Many people knew of him as a rancher, remembering seeing camels grazing on one of his ranch properties. Throughout his life, Hudson owned and traded thousands of acres of ranch land and focused on raising cattle. He worked to clear that land and to return it to the beautiful grasslands with running water and springs. At one time, he was the single largest landowner in Kansas, as well as the largest independent cattleman in Kansas and Texas for many years.

Hudson gave back a great deal to the community during his life. In many cases, he was an anonymous benefactor, and his donations helped with projects including rebuilding churches, supporting museums, and most recently creating a Foundation to help rebuild Greensburg, Kansas, homes after the devastating tornado in 2007. He also was a major benefactor of the Mayo Foundation.

Hudson received many lifetime honors and achievements, but was most proud of his agricultural impact and its effect on the world. His latest project involved wind energy, further proving his dedication to creating a positive effect in the environment.

Finding his wife late in life did not stop Hudson and Peggye from spending 12 years traveling the world, working on the land, and enjoying their camels together. Hudson passed away in 2008 at his home in Wichita Falls, Texas, due to complications of lung cancer, leaving behind three adult children.

Hudson was a lifetime member of the Shriners. His life desire upon his death was to leave his entire estate to the Shriners to assist in building more Shriners Crippled Children’s Hospitals and Burn Centers across the United States. 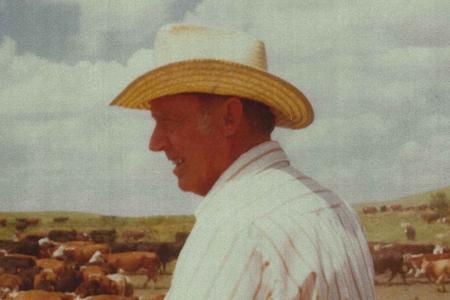