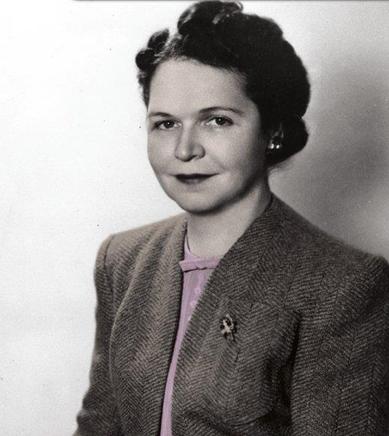 Georgia Neese Gray (27 Jan 1900 - 25 Oct 1995) is best known for being the first woman United States Treasurer during the Truman Presidency. Georgia was from the small town of Richland, Kansas. Her father owned a majority of the property in Richland, including the town bank, general store, and agricultural centers. Georgia graduated in 1917 from a high school in Topeka, Kansas. Shortly after graduation, she attended Bethany College. This led to Georgia transferring to Washburn University. At Washburn, she was the president of the drama club, which drove her ambition to become an actress. Georgia graduated from Washburn University in 1921, with a major in economics. She moved to New York City, where she attended Franklin Sargent School of Dramatic Art to pursue her love for acting. Georgia toured and performed professionally until 1930, when she returned home to take care of her sickly father.

In 1937, Georgia’s father passed away, leaving her to inherit the family businesses in agriculture, retail, and banking. She became the President of Richland Bank in 1938. She also managed the town’s general merchandise which was housed in the same building as the town bank.  In 1949, the bank had deposits of $500,000. Additionally, Georgia owned seven farms adding up to over eleven hundred acres, which she managed for over ten years.

Georgia was involved with many organizations, a few including: Treasurer of the Farm Bureau of Monmouth Township, director of Monmouth Township and Richland 4-H clubs, and chairman of the League of Women Voters. From 1936-1964, Georgia served as the Democratic National Committee member from Kansas. The support from this position gave her the nomination of becoming the first woman Treasurer of The United States from 1949-1953. Georgia also served as the first woman on the Washburn University Board of Regents and eventually became chair. Washburn University recognized her contributions in 1950 with the Distinguished Service Award. A campus lecture series in her name began in 1955 after her passing for the purpose of enhancing the status of women and creating a forum for understanding the role of women in decision making and leadership. Additionally, she was named Distinguished Kansan by the Native Sons and Daughters of Kansas in 1982.

She is remembered by the Georgia Neese Gray Performance Hall at the Topeka Performing Center and the Andrew J. and Georgia Gray Theatre on the Washburn University campus.