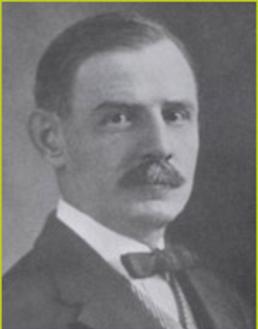 William B. Strang had a remarkable career as a railroad builder all over the country and promoted, financed, and built several railroads in the north, south, east, and west. He came to Kansas in 1885, to continue building railroads, residing in Johnson County. He constructed the Strang Line from Kansas City to Olathe. W. B. Strang built the first self-propelled railroad motor car in the world which he put into service and operated successfully. He organized the Strang Gas-Electric Company of Garwood, New Jersey, where the cars were manufactured. They were one of the transportation sensations of the time.

Strang was born in Syracuse, New York, to Irish emigrant parents on November 8, 1857. He received his education in the public schools in New York, Wisconsin, and Iowa. In 1892, in Wellington, Kansas, he was married to Margaret Morrison of Wellington. They made their home in Overland Park, Kansas.

When he was fifteen years of age, he began his railroad construction career at Sheridan, Iowa. He worked on the building of the Chicago, Burlington & Quincy Railroad until that line reached Ft. Kearney, Nebraska. In 1874, he took part in the building of the Baltimore & Ohio into South Chicago. From 1874 to 1879, he was connected with the construction of the Cincinnati Southern, later the Queen & Crescent, from Cincinnati to Chattanooga, Tennessee. In 1979, he returned to Nebraska and built thirty miles of the Missouri Pacific from Omaha to Falls City. In 1880, he went with Santa Fe and started the first mile of construction from the Kansas line west into Colorado and to Santa Fe, New Mexico. He also assisted in the construction of the switchback over the Raton Mountains in New Mexico before the tunnel was built there.

In 1885, he came to Kansas and built the Wellington & Western twenty miles in the direction of Jasper. In the latter part of the same year, he was instructed by the Santa Fe officials to prepare for quick action and tear up that track before an injunction could be filed. This road had been built to fight a parallel line which was being built by Leavenworth, Lawrence & Gulf Railroad. In 1886, he commenced building the Kansas City, Springfield & Memphis through the Ozarks, which was completed to Memphis in 1889. Upon his return to Kansas, he started the construction of a line of his own from Belle Plaine to Conway Springs. He promoted and financed this road and secured township bonds to assist in the building. He also assisted in the construction of the branch line from Newton to Winfield, Kansas, in 1891.

In the latter part of 1892, Mr. Strang took the contract for building the Sheffield and Birmingham Railroad, which was 100 miles long, and completed that road in the latter part of 1893. In 1894, he took the contract for building the Macon & Birmingham Railroad between Macon and the Alabama state line. At the same time, he took the contract for building the Macon & Atlantic Railroad between Macon and Port Carrollton on the south Atlantic coast near Savannah. The mileage under these two contracts was 375 miles. This work was completed in 1896, and Mr. Strang then went to New York and took the contract to build the New York, Susquehanna & Western Railroad from Strausburg to Wilkes-Barre, Pennsylvania. The cost of the New York, Susquehanna & Western Railroad was $69,000 per mile for grading alone and it required four years to complete that road. At the time he was building this road, he was also building the Columbus extension of the Mobile & Ohio between Columbus, Mississippi, and Montgomery, Alabama. Mr. Strang completed the financing, construction, and equipping of this road, including all the round-houses, right of ways, and terminals. After putting the line in full operation,  he turned it over to the Mobile & Ohio Railroad Company for $4,200,000. This line was 210 miles long. Before those roads were completed, Mr. Strang began building the Detroit & Toledo Shore line between Detroit, Michigan, and Toledo, Ohio. At the same time, he was also building the Detroit and Lima Northern, a line 200 miles in length. Mr. Strang sold the Detroit & Toledo Shore Line in 1904 to Grand Trunk Railroad Company of Canada and went to London, England, to consummate the deal, spending a part of 1905 in Europe.

Mr. Strang was also a partner in building 175 miles of the Kansas City Southern from Fort Smith, Arkansas, south. At the same time, Mr. Strang built the Nova Scotia Southern Railroad, 120 miles from Yarmouth towards Halifax. While constructing this line, he also took a $1,000,000 contract for the Metropolitan Waterway which furnished the water supply for Boston and its suburbs.

When he returned full time to the Johnson County, Kansas, area in late 1905, the community consisted of farms and pasture land with a few scattered homes and one business. By 1921, when he died, he had established several housing developments, an interurban railroad, and an airfield.

In August 1906, Strang platted several subdivisions. He named one "Overland Park." Starting in September 1906, lots in the various subdivisions were sold and auctioned. To transport people from his new subdivisions into Kansas City and back, Mr. Strang built the interurban Strang Line. Construction began in the fall of 1905 with oak ties and 70-pound rail. The first section from Lenexa through Overland Park to 41st and State Line was competed in early 1906. Mr. Strang made railroad history with his innovative cars. The vehicles were forerunners of today's diesel-electric locomotives. They were entirely self-propelled and did not require electricity from overhead wires. Later, the line was converted to electric trolley operation. The electricity was produced by the company's own generators.