Dwane L. Wallace was born in Belmont, Kansas, October 29, 1911. He attended Norwich High School, and then went to Wichita to attend the university. On September 8, 1941, he married Velma Lunt. They were blessed with four daughters. He resided in Wichita until his death in December 1989.

Known as aviation's "Tall Man," Wallace was an industry pioneer and leader of the world's largest producer of general aviation aircraft. He cast a giant shadow over the industry for more than 50 years as the man who had the greatest influence on the steady growth of general aviation. Mr. Wallace's continuing vision and understanding of the needs of the marketplace enabled Cessna to grow from one airplane model line to a model line which covered the entire spectrum of business and private flying from the two-place model 140 trainer to the turbo-fan Citation jet.

Wallace remembered the morning, at the age of ten, when he saw a Jenny winging overhead. Watching the little airplane until it was out of sight, the boy told himself, "That is what I want to do." From that moment, Wallace was convinced that his future was in aviation and he never wavered from that decision. During college days, he flew gliders. On March 18, 1934, he soloed in an OX-5 Travelair with only one hour and forty-five minutes instruction. He held a commercial pilot's license with multi-engine and instrument ratings, and was an active pilot until his death.

In 1929, he enrolled in the University of Wichita - one of only three universities in the country which offered a bachelor's degree in aeronautical engineering. Following graduation in 1933, he joined Walter Beech at Beech Aircraft Company as an engineer for three months.

In January, 1934, he persuaded C. V. Cessna to let him and his brother, Dwight, reorganize the Cessna Aircraft Company - then closed because of the depression. Wallace volunteered to be general manager with C. V. as President and Dwight as Secretary-Treasurer.

Two years later when his uncle retired, 25-year-old Wallace became President of the company and set out to make it the number one light plane manufacturer. Wallace's sharp engineering skills allowed him to create high-quality, low-cost planes that could be made on efficient assembly lines. Securing an important order from the World War II Allies in the early 1940s, Cessna went on to develop aircraft for military, consumer and business needs. By 1958, Cessna was producing more light airplanes than all four of its competitors combined, and eventually controlled 53% of its market. Wallace was firmly credited as having single handedly built the light-plane industry.

Wallace held the position of President until 1964, when he received what he called "my first promotion in 28 years," and moved up to Chairman of the Board. He headed Cessna in that position until 1975, when he retired following a self-mandated "age 65" retirement policy. However, he continued to serve as a Senior Consultant until 1983.

Wallace not only served as President, but also as engineer, salesman and test pilot, which included the testing of the company's first twin-engine T-50 in 1939. A major change in the company's fortunes took place in 1940, when Wallace sold the twin-engine T-50 bomber trainer to the Royal Canadian Air Force. The new contract and ensuing agreements with the United States Army and United States Air Corps helped give the company financial stability.

Following the war, Wallace quickly turned production at Cessna back to commercial aircraft, actively directing development of the company's extensive product line, which at the time was the broadest of any offered in general aviation - from the little two-place 140 to eventually the turbo-fan Citation business jet. This also involved his participation in the organization of a distributorship chain with more than 1,000 employees in the beginning to 15,000. It was the first firm in the world to manufacture 100,000 airplanes, surpassing that mark in 1972. All but 200 of the aircraft built by Cessna were built during Wallace's tenure.

He was instrumental in forming the General Aviation Manufacturer's Association and was named its first chairman in 1969, a position he held for two years. In 1968, Wallace was a founder of the Aviation Progress Committee to support the Airport/Airways legislation. This led to the passage of the important Airport/Airways Development Air Program in 1970.

At the same time, he not only worked hard for his own company, but also combined a lifelong career in aviation with distinguished achievement in public services. He had been recognized for his participation in national and state governments, as a contributor of his time, and for his talent and philanthropic efforts to all areas of society until his death in 1989.

In January, 1975, he received the International Daniel Guggenheim Medal for great achievement in aeronautics - the first award to be presented in the field of general aviation. The Guggenheim Medal Board of Awards selected Wallace for his honor with the following citation: "For his many engineering, management and leadership contributions in the development of General Aviation from a novelty 50 years ago to a key part of the world's transportation system today." The first of these awards was given to Orville Wright in 1929.

In 1981, he was selected to receive the Wright Brothers Memorial Trophy "for distinguished leadership, technical innovation, engineering management, and public service contributing to the development of aviation in United States." This citation was inscribed on the trophy presented to Wallace, as well as on the original trophy displayed in the National Air and Space Museum of the Smithsonian Institution.

He was instrumental in forming the Wichita State University Endowment Association and served as its first chairman. He was recipient of the following awards: University's 1957 Alumni Achievement Award; the first 1968 Distinguished Engineering Alumnus Award; 1971 Kansan of the Year Award; in 1978, he was inducted into the OX-5 Aviation Pioneers Hall of Fame; 1990 Kansas Aviation Hall of Fame, posthumously; and, in 1992, the first Wichita State University Distinguished Engineer Service Award, posthumously. These are but a few of the distinguished awards received by Mr. Wallace.

He served on the Fourth Financial Corporation, Kansas Gas & Electric Company and the Coleman Company boards for many years. Memberships on boards such as United Way, Music Theatre, Metropolitan Wichita Council, etc., were a special contribution to his community.

Committed to their community, Wallace and Velma were eager to make a difference in the lives of students, both remembering how each had worked their way through school. In 1976, Wallace and his wife established the Dwane L. and Velma L. Wallace Endowment which supports scholarships for engineering students and provides funds for the College of Engineering. The scholars program has benefited more than 200 students. 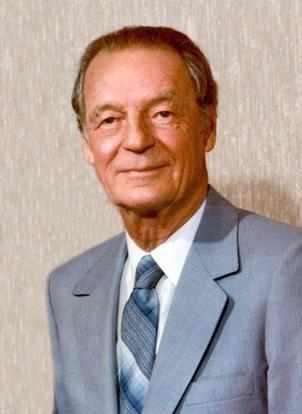