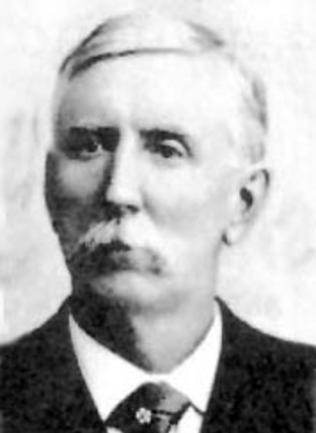 Joe McCoy, as he was known in Abilene, has been called, "A Visionary on the Prairie." Advertising Abilene was a major part of McCoy's plan to develop the town as the principal shipping point for Texas cattle coming up the Chisholm Trail in the late 1860s, destined for the packinghouses in the East and Midwest. Between 1867 and 1871, he succeeded in that objective. Longhorn cattle, cowboys, Abilene, Kansas, and Joseph G. McCoy all became synonymous with the wild, barely tamed life of the drovers on the Chisholm Trail in the late 1860s. McCoy's role as an important innovator in the economy of the nineteenth century cattle trade has been long acknowledged by historians. John Wickman, former director of the David D. Eisenhower Library, wrote his story in the Journal of West (January, 1986) and concluded that Joseph G. McCoy would be an excellent honoree for the Kansas Business Hall of Fame.

Joe McCoy was born in 1837, into a moderately prosperous farm family in Illinois. After one year at Knox Academy in Galesburg, he left school to learn the livestock feeder operations and cattle-trading. He worked with two of his brothers. By 1861, he had married Sarah Epler and was settling into a comfortable domesticity. He was buying and selling cattle on his own, apart from his brothers. The Civil War was a boom time for cattle business in Illinois and, by the end of the war, the McCoy brothers were financially comfortable.

McCoy was aware of the growing frustrations of Texas cattlemen who were trying to get their herds through the legal tangle and physical troubles to the westernmost available rail lines. During a visit to the Kansas Pacific Railroad office in St. Louis, he received verbal assurances that if he would set up a loading yard and attract Texas herds to it, the railroad would pay him commission on each car load of cattle. In order to make his venture profitable, McCoy would have to find a location and set everything in motion while the shipping season was on, which meant the summer and fall of 1867. Under the pressure of time, McCoy went to Junction City, Kansas, adjacent to the U.S. Army post, Fort Riley, but found the business climate hostile to his proposal. He went on west to Salina, but that area was already being settled for agricultural pursuits. Coming back east, he settled for Abilene, still undeveloped, able to provide just what McCoy needed and wanted. He bought land east of Abilene in June, 1867, and began construction of his stockyards big enough to hold 1,000 head of cattle, installed scales, built an office and a barn. He also began construction on a hotel and a livery stable and bank building which was everything necessary to conduct business. On September 5, 1867, the first 20 carloads of longhorns were loaded and on their way to Chicago.

McCoy was also involved in the laying out of the Chisholm Trail, along which thousands of heads of cattle were trailed to the Abilene rail head. According to historian Joe Frantz, "Most observers feel that the Chisholm Trail should have been named for McCoy."

The next three or four years were a booming success. But, of course, the livestock business was a seasonal activity. The town, however, had developed another class of citizens which was more permanent: store owners, clerks, suppliers of many types and kinds, railroad personnel, grain dealers, etc. It was this group that was demanding year-round stability in the community, now that it was growing.

On April 3, 1871, McCoy was elected mayor Abilene, a fact which demonstrated his personal popularity among all groups in the town. He hired "Wild Bill" Hickok as marshal to keep the peace among the cowboys. That year was a watershed for Joseph McCoy in other ways, however. His personal fortune had been exhausted by constant promotion, a family to support, and the shifting winds of the volatile livestock market. Texas cattle were now going to other towns which had emulated the McCoy approach, but where settlement had not yet drawn the lines so clearly.

In 1872, McCoy was selling iron fences out of Wichita. But to be back in the cattle business was his consuming passion. Joseph McCoy was 36 years old when he left Abilene for Kansas City, Missouri. During the next 41 years of his life, he was active in the cattle business in one way or another. He established a commission house in the growing Kansas City stockyards, became executive secretary of a Livestock Men's National Association, and was a publicist for the Wichita, Kansas, stockyards. In 1881, he moved to Wichita. For the remaining years of his life, he was still involved in cattle, first as an agent for the Cherokee Nation in Oklahoma, helping them systemize taxes on cattle crossing their lands, then as an enumerator of cattle for the Census Bureau in the Southwest. In 1889, he moved to Oklahoma. McCoy died October 19, 1915, and was buried in Wichita next to his wife, who had died in 1911.

In 1874, McCoy wrote Historic Sketches of the Cattle Trade of the West and Southwest, which is considered one of the best contemporary treatments of the cattle trade in the U.S.

What Joseph McCoy started in Abilene by creating an atmosphere conducive to luring the drovers, facilitating the conduct of their business, and providing the shipping facilities was replicated in the other famous cow towns in Kansas: Ellsworth, Newton, Wichita, Dodge City, and Caldwell. Some lasted longer than Abilene and some not as long. McCoy's vision of prospering by facilitating a merger of the Texas cattle trade and the expanding railroads was a potent mix that lured many to take the same gamble that he took. His major accomplishment was in opening the markets for the trail herds and stimulating a new chapter in the American livestock industry.