Alan Mulally was born August 4, 1945, in Oakland, California. He graduated from the University of Kansas in 1969, with a Bachelor of Science and Master of Science degree in aeronautical and astronautical engineering. He is an alumnus of the Kappa Sigma Fraternity and was its 2007 Man of the Year. Mulally also received a Master's degree in Management as a Sloan Fellow from the MIT Sloan School of Management in 1982.

Mulally was hired by Boeing immediately out of college in 1969 as an engineer and advanced through the company in a series of engineering and program management positions, making contributions to the 727, 737, 747, 757 and 767. He led the cockpit design team on the 757/767 project. Its revolutionary design featured the first all-digital flight deck in a commercial aircraft, the first two-man crew for long-range aircraft and a common type rating for pilots on two different aircraft. He worked on the 777 program first as director of engineering and from September 1992, as vice president and general manager.

He was later named Vice President of Engineering for the commercial airplane group. He is known and recognized for elevating Phil Condit's "Working Together" philosophy through and beyond the charge of all airplane development activities, flight test operations, certification, and government technical liaision. In 1997, Boeing made Mulally the President of the Information, Space & Defense Systems and Senior Vice President. He held this position until 1998, when he was made president of Boeing Commercial Airplanes (Chief Executive Officer duties were added in 2001). Mulally was largely credited with BCA's resurgence against Airbus in the mid-2000s. For Mulally's performance at Boeing, Aviation Week & Space Technology named him as a person of the year for 2006.

Mulally was named the President and CEO of Ford Motor Company on September 5, 2006, succeeding Wiliam Clay Ford, Jr. He took over "The Way Forward" restructuring plan at Ford to turn around its losses and declining market share. Mulally's cost cutting initiatives, which included cutting dividends, led to the company's first profitable quarter in two years.

In 2006, Mulally lead the effort for Ford to borrow $23.6 billion by mortgaging all of Ford's assets. Mulally said that he intended to use the money to finance a major overhaul and provide "a cushion to protect for a recession or other unexpected event." At the time, the loan was interpreted as a sign of desperation, but is now widely credited with stabilizing Ford's financial position. Due to his achievements at Ford, he was included in 2009 Time 100 list. The entry, written by Steve Ballmer, says, "[Mulally] understands the fundamentals of business success as well as any business leader I know."

Mulally previously served as co-chair of the Washington Competitiveness Council and sat on the advisory boards of NASA, the University of Washington, the University of Kansas, Massachusetts Institute of Technology, and the U.S. Air Force Scientific Advisory Board. He is a member of the United States National Academy of Enineering and a fellow of England's Royal Academy of Engineering. Mulally also served as a past president of the American Institute of Aeronautics and Astronautics (AIAA) and is a former president of its Foundation. Additionally, Mulally served as a past chairman of the Board of Governors of the Aerospace industries Association.

Mulally has played on the semi-pro circuit for tennis and also enjoys golfing. In his spare time, he has taken to flying small planes. He is married to Jane "Nikki" Connell, and their family consists of three sons and two daughters. 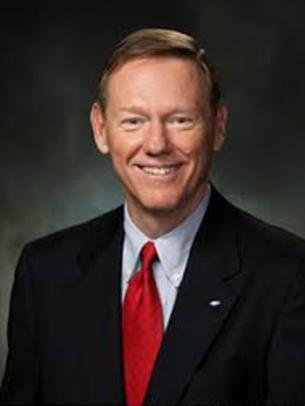