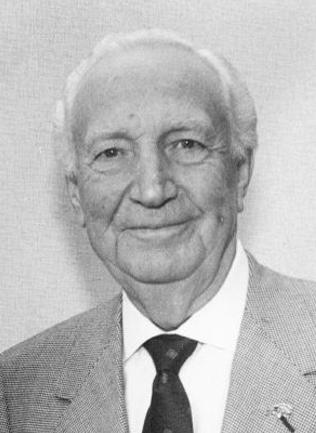 It is unlikely that any discussion of Wichita’s business climate would fail to include the contributions that Frank Barton made during his life. After starting his career in 1940 as a salesman at the Montgomery Ward store in Shawnee, Oklahoma, Barton became a store manager. He moved to Wichita in 1949 as a regional sales manager for Western Auto’s Wichita division. Three years later, Barton made a crucial decision—he started his own business, Barton Distributing Company, which handled appliances, electronic equipment and consumer durable goods.

Barton Distributing served more than 300 dealers in nearly 80 percent of Kansas, and he was recognized as one of the leading distributors in the nation for companies such as Gibson, Motorola and Coleman Heating and Air Conditioning.

Barton teamed with Tom Devlin in 1973 to start Rent-A-Center, which became a nationwide chain of rent-to-own stores featuring furniture, appliances and electronic equipment. Barton sold his distributing company six years later to devote his full attention to the new and prospering venture. In the fall of 1987, Rent-A-Center was sold to Thorn EMI, a British firm, for $594 million.

Targeting a considerable amount of generosity on Wichita State University, the alma mater of his wife, Patsy, Barton gave $12 million to endow WSU’s College of Business Administration. In gratitude, the university conferred a Doctor of Humane Letters degree upon Barton and named its business school the W. Frank Barton School of Business.

Mr. Barton died September 28, 2000. His wife, Patsy, still resides in Wichita. Of his five children, three survived him—Steve, Linda Wiens, and Craig, and one granddaughter. Mr. Barton was preceded in death by a daughter, Shera, and a son, Clay.