Fred Harvey was born in London on June 27, 1835, and came to America when he was fifteen. Nine years later, he opened a restaurant in St. Louis, but it went out of business when his partner ran off with their cash at the start of the Civil War.

Harvey eventually moved to Leavenworth and worked as a traveling freight agent for the Chicago, Burlington, and Quincy Railroad. As he traveled about his territory by train, he was amazed at the poor eating conditions for rail passengers.

The menu was often the same - greasy stew and bitter coffee. Several times, Harvey was the victim of a popular trick by dishonest trainmen and restaurant owners: Railroaders collected passengers' money before their train made a meal stop. Then - just as hungry passengers were served their food, the engineer whistled and began to pull away from the station. Customers ran to catch the train, leaving uneaten food that the restaurant owner resold to unsuspecting travelers on the next train. Harvey soon got his fill of this treatment.

Fred insisted that his company operate a clean, well-run restaurant in a depot. The CB&Q's managers laughed and sent him to a struggling new railroad, the Atchison, Topeka and Santa Fe. Santa Fe officials liked Harvey's idea. In 1876, they invited him to Topeka where he opened the first Fred Harvey restaurant in the AT&SF depot. Because it offered good food, clean surroundings, and polite service at reasonable prices, it was an immediate success.

Soon Harvey opened more eating houses. Eventually, they grew into a chain of restaurants and hotels spaced every 100 miles along the Santa Fe's main line. At each Harvey House, he insisted on using only the finest furnishings and table service, not to mention the highest quality food. To meet Harvey's tough standards, his company kept its own beef herd in western Kansas, operated its own dairies at Newton and other points, and shipped tank cars of fresh water to restaurants in desert areas.

Perhaps the most popular part of his service was the "Harvey Girls." Harvey imported many of these waitresses from the East. He gave each a weekly salary of $17.50, plus room and board in the local Harvey House.

In their plain black uniforms with crisp, white collars and aprons, the Harvey Girls quickly became a symbol for the restaurant chain's respected reputation. They were trained to handle hungry crowds of train passengers quickly, efficiently, and politely.

Before a train arrived, Harvey Girls had tables set and drinks ready to pour. As a train pulled in, the restaurant manager rang a gong to signal the waitress into action. Customers were quickly seated, served, and eating with no complaints.

To make sure there was nothing to complain about, Harvey inspected all his restaurants and hotels personally, often by surprise. If he saw improperly set tables, he jerked the tablecloths away, flinging silverware and dishes onto the floor. His high standards also meant that all male customers had to wear dinner jackets in his dining rooms. Each restaurant kept extra coats hanging near the door for men who tried to enter without one.

When the Santa Fe Railroad introduced dining cars in 1890, Harvey took charge of that service, too.

After his death on February 9, 1901, his family continued to operate the company. For many years, Fred Harvey's name meant the finest food and accommodations in the West. 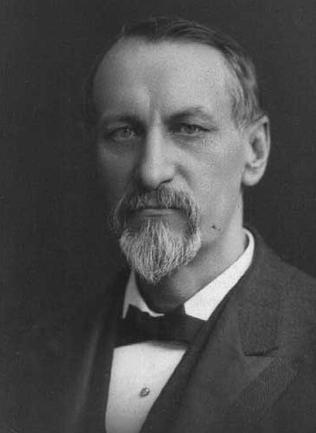