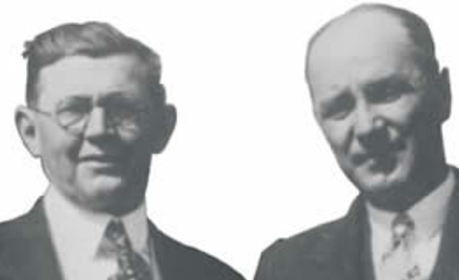 White Castle® System, Inc., was formed in Wichita, Kansas, in 1921, by a partnership between Walter Anderson, a professional cook, and Edgar Waldo "Billy" Ingram, a local real estate and insurance agent. In 1916, Anderson developed a different method of preparing a hamburger sandwich by flattening a ball of ground meat and cooking it with onions on a hot griddle for a short period of time. Prior to Anderson's method of preparation, the hamburger sandwich consisted of a thick ball of ground meat cooked slowly on a griddle for an indefinite period of time. His hamburger sandwich proved popular enough for Anderson to open three hamburger stands in Wichita between 1916 and 1920. In March 1921, Ingram joined Anderson as a partner in the operation of a fourth location under the name White Castle®. The company incorporated, in 1924, as the White Castle® System of Eating Houses.

Anderson and Ingram opened another hamburger stand in Kansas City in 1924.   Over the next six years, they rapidly expanded their company's operations to include locations in twelve major cities in the eastern half of the United States. This expansion created the need for a more centrally-located corporate headquarters, so, in 1934, the company moved its business operations to its present location in Columbus, Ohio. By this time, White Castle® was wholly owned by Billy Ingram, who bought out Anderson's share in the company in 1933.

The company's rapid expansion was due in part to its development of the methods required to operate the first chain restaurant in the country. With the help of suggestions from employees, the company also developed much of the equipment used at its restaurants. One of the company's patented developments, a paper hat for restaurant employees, resulted in the formation of a corporate subsidiary, the Paperlynen Company.

White Castle® was innovative in the company's marketing of its products. In the 1920s, the average American had a negative perception about the hamburger sandwich. In an effort to change this attitude and to expand its carryout business, White Castle® pioneered the newspaper coupon. First used in St. Louis on June 3, 1932, a White Castle® coupon was good for a carryout order of five hamburgers for the cost of ten cents. The coupon offer proved an overwhelming success and helped the company introduce its hamburger to a wider audience. Other company innovations in marketing included the use of free handouts such as score pads for bridge, golf, and bowling, all containing advertisements for White Castle® products and a listing of its restaurant locations.

White Castle® also developed another subsidiary, White Castle® Distributing, Inc., to market its line of frozen, microwave hamburgers after a series of highly publicized "carryout" orders of thousands of White Castle® hamburgers to the Marines in Beirut, Lebanon, in 1982, and to various cities in Arizona and California during the 1980s. White Castle® remains a privately-held company owned by the Ingram family and operates close to three hundred restaurants and a number of subsidiary businesses.

Today, Columbus, Ohio-based White Castle® remains committed to both the innovative, entrepreneurial spirit that inspired the chain's co-founders and the traditions that have contributed to White Castle's® success.