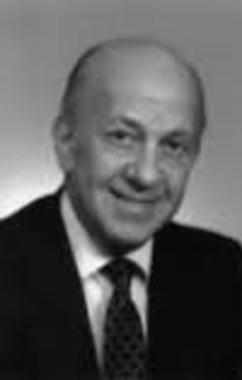 A certified public accountant, Fran Jabara earned his undergraduate degree from Oklahoma State University where he developed his own photography business and helped establish a chapter of the Alpha Tau Omega Fraternity. He completed his graduate studies at Northwestern University after serving three years in the U.S. Army during World War II.  Mr. Jabara joined the faculty at Wichita State University in 1949 and served the University for 40 years until he resigned in 1989.  He was appointed Distinguished Professor in 1971, and served as Dean of the College of Business Administration for seven years.

Compelled by his advocacy of the American Enterprise System and his firm belief in the important role of the entrepreneur to the perpetuation and growth of our system, he founded one of the first Centers for Entrepreneurship at Wichita State University in 1977.  This program became internationally recognized and is well known as one of the finest and most comprehensive programs of its kind in the nation. He co-founded the Association of Collegiate Entrepreneurs (ACE), the largest national organization for collegiate students interested in entrepreneurship with members in all fifty states and twenty foreign countries.

Mr. Jabara is the founder of a merchant banking and investment company, Jabara Ventures Group, as well as the Jabara Family Foundation.  He is also a member of the board of directors of numerous corporations. In 1985, Jabara co-founded Leisure Hotels Group with Richard Smith and Steve Olson.  In 1994, Jabara was the director of Union National Bank.

A recognized national leader in entrepreneurship, he was awarded the prestigious Leavey Award for Excellence in Private Enterprise Education and the George Washington Honor Medal by the Freedoms Foundation.  In 1991, he was the recipient of the Ernst Young, Merrill Lynch, Inc. Magazine Award for Entrepreneur of the Year.  Jabara was the chairman of the Kansas delegation to the 1986 White House Conference on Small Business.  In 1991, he was the founder of the Project H.O.P.E. + E, a program designed to communicate ingredients of success through entrepreneurship to minority fifth graders.

In 1996, Wichita State University dedicated Jabara Hall, and that same year Mr. Jabara was inducted into the Hall of Fame at Oklahoma State University. Jabara still supports Higher Education at OSU through scholarships in accounting and professional entrepreneurship. In 1996, Jabara was also granted emeritus status by the Kansas Board of Regents. He was a 1997 Laureate for the Wichita Business Hall of Fame. The year 1999 was a busy one for Jabara. Both his wife and he received the Cardinal Newman Medal from Newman University.