Lyle Edgar Yost has referred to himself as a product of Hesston, Kansas.  However, to no small extent, modern day Hesston has been shaped by Lyle Yost.  Born in March, 1913, on a farm about a mile and a half northwest of Hesston, Yost led a normal childhood.  He attended grade school and high school in Hesston and was prepared to enter Hesston Junior College in 1931.  However, financial difficulties associated with the Great Depression delayed his entry until 1934.  Yost attended the college for one year and while there met his future wife, Erma Martin, of Minot, North Dakota.

Following his first year at Hesston Junior College, Lyle transferred to Goshen College in Indiana where he received an economics degree in 1937. Upon the untimely death of his father in 1942, Lyle assumed the operation of the family farm outside Hesston.  Because of the mobilization efforts associated with WWII, there was no new farm machinery available to local farmers.  As a result, farmers who had equipment were encouraged to engage in custom work to help their neighbors.  Since Yost possessed a nearly new Minneapolis-Moline combine, he began custom combining in 1943.

During his time as a custom combiner, Yost became disenchanted with the capabilities of his equipment.  In 1947, he and Hesston machine shop owner Adin Frank developed the Hesston Unloading Auger which could be attached to various combines and which allowed grain to be offloaded while on the move.  The auger proved so popular that by October, Yost, Frank and a third partner formed the Hesston Machine and Manufacturing Company to produce the augers.

In 1956, the company was renamed Hesston Manufacturing and over the next decade Hesston developed more than 70 new attachments and parts to improve the work of combines.  In 1955, Hesston entered the hay and forage market with the introduction of the first commercially available self-propelled swather.  In the late 60's and 70's, Hesston changed the way hay was produced through the introduction of a number of new products including the first one-man haying system.  Finally, in 1978, Hesston introduced the first "big baler."  It was designed to produce one-ton rectangular bales.  While Hesston did not invent the round baler, it dramatically improved upon the original design by adding such features as the "open throat" design which facilitated easy bale starting.

In 1980, Yost sold the company and it was eventually acquired by AGCO, a world-wide manufacturer of agriculture equipment.  By the late 90's, Hesston held more than 800 national and foreign patents and was a major marketer of innovative products.  Many of these products are still manufactured in Hesston, Kansas.

Hesston Manufacturing is not the only contribution Yost has made to Kansas.  He has been very generous to his community, his state, and world society.  That generosity has included gifts of money as well as gifts of time and effort.  A short list of these contributions includes the Mennonite Economic Development Associates (MEDA) which has engaged in economic developments in South America and the Aspen Chapel in Aspen, Colorado, which is an interfaith organization that features Christian services and Jewish Shabbatwls weekly.  His charitable work also includes membership in such organizations as the Arthritis Foundation of Wichita and the Fairmount Society, a charitable group dedicated to financial support for various causes including higher education. 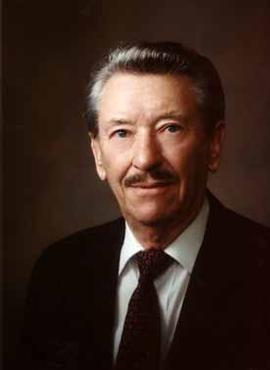