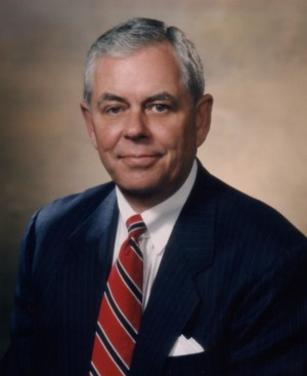 Robert J. Eaton was born in Buena Vista, Colorado, and moved to Arkansas City, Kansas, as a boy. His first job was delivering papers for the Arkansas City Traveler earning 35 cents for delivering more than 100 newspapers a day. He traces his interest in automobiles to age 11 when he bought his first car, a 1933 Chevrolet. "I bought it for $10 and spent another $15 getting it to run. I got my driver's license at 14. By the end of high school, I had owned 10 cars and 12 motorcycles."

Eaton earned his bachelor of science degree in mechanical engineering from the University of Kansas in 1963 and joined General Motors Corporation. He held a number of engineering and executive positions before he became president of GM Europe in 1988. In 1992, he joined Chrysler as vice chairman and chief operating officer. In 1992, he was elected chairman and chief executive officer succeeding Lee Iacocca.

In 1994, Eaton received the Distinguished Service Citation from the university and the KU Alumni Association in recognition of his achievements. He was also invited to give the 1995 Vickers Lecture titled "Chrysler and Free Enterprise in the 21st Century".

In 1998, Robert Eaton, chairman of the world's No. 6 car company, Chrysler, and Juergen Schrempp, chairman of No. 15 Daimler-Benz, merged their two companies to form DaimlerChrysler Akteingesellschaft, the world's fifth biggest automobile concern. The new company, valued at $40 billion, was expected to generate $130 billion in sales and employ more than 400,000 people. As part of the merger agreements, Eaton was to serve as DaimlerChrysler's chairman for up to three years, during the transition, at which time he would be succeeded by Schrempp.

Eaton retired as Chairman of DaimlerChrysler AG on March 31, 2000. He had served as Chairman and CEO of Chrysler Corporation for seven years prior to the merger and presided over the most successful period in the company's history before forging the alliance with Daimler-Benz that resulted in the formation of DaimlerChrysler AG. "The merger is complete," Eaton told his management in a meeting announcing his retirement. "The structure and future leadership is in place. The two companies are one, my goal has been accomplished. This is the right time for me to go. The first full year of DaimlerChrysler has been a great one. Our sales revenues for 1999 are up about 12 percent. We sold 3.2 million Chrysler, Dodge, Plymouth, and Jeep products -- more than any other year in history. We sold more than a million Mercedes-Benz passenger cars and 550,000 commercial vehicles -- both also records."