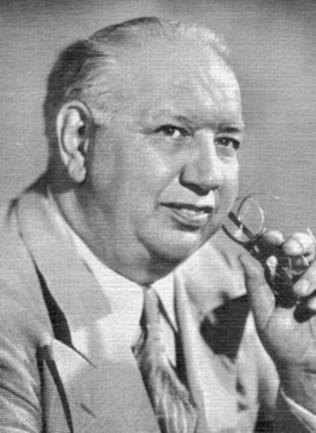 John J. Vanier parlayed his success in the milling industry into the founding of CK Ranch and the many activities that operation has exemplified over the years.

John Vanier was born to Jacob C. and Julia A. Vanier, in 1897, on a farm which his grandfather had homesteaded in Pawnee County, Nebraska. While still a boy, the family moved to Kansas City, Missouri. As a young man, he secured employment there with the E.D. Fisher Commission Company in the Board of Trade Building where he came in daily contact with the grain trade and milling industry. Later, he became a salesman for the Abilene Flour Mill in Abilene, Kansas.

Following his service in the Marine Corps in World War I, he returned to the mill in Abilene and through hard work and, carefully planned investments, accumulated enough capital to secure controlling interest in the Western Star Milling Company at Salina, Kansas, in 1925. Having served a solid apprenticeship in the milling business, Mr. Vanier immediately displayed his industrious nature and faith in his own convictions for he took the Western Star Milling Company from its floundering status to an efficient, profitable firm that became the cornerstone upon which he gained ownership and assumed guidance for several other grain and milling firms in Kansas, Oklahoma and Nebraska.

His success in the milling industry provided substantial financing opportunity that resulted in the founding of CK Ranch. He knew when something needed bought. When the country was in the depth of depression and sour economics brought financial ruin and despair to so many, John Vanier believed that land values, at their lowest in the early 1930s, afforded great opportunity for sound investment in good farm and ranch property. It was this conviction that prompted his entry in the ranching business with the purchase of land in Ellsworth County, Kansas, in 1933.

The initial purchase of 5600 acres included what had been known as the E. S. Root Ranch, including a large stone ranch house built by Mr. Root in 1912, in the Brookville, Kansas, area. It was near the Terra Cotta Stockyards that had represented the end of the railway line, those many years ago. Brookville, in the 1870s, had been a thriving headquarters for drovers, cattle buyers, railroad headquarters and roundhouse people. Eventually, the CK Ranch included farm and ranch properties at Hunter, Dorrance, Herington, Manhattan and Salina in Kansas. In addition, commercial cattle ranches and a feedlot were established in Wyoming, Colorado, Oklahoma and Kansas. Mr. Vanier also built a business empire that included milling plants, elevators, soybean plants, warehouses, food processing plants, livestock feed mixing plants and dehydrating and pelleting plants that were located in a half dozen midwestern states, as well as other real estate interests that developed along the way.

John Vanier served on the Board of Directors of the American Hereford Association and as its President in the 1952 fiscal year. He was one of five living inductees among the first 38 people who were chosen, in 1978, for inclusion in the Honor Gallery of the Hereford Heritage Hall in the American Headquarters building.

The Red Circle "No Money" Auctions are a outstanding example of the many projects and activities John Vanier sponsored via his many business interests. The Gooch Feed Mills made a practice of providing a customer coupon sewn into each feed bag in the form of a red circle tag. The tag coupon was usable by farm and ranch youths as "money" in the special Red Tag sales at CK Ranch. There was no limit as to how many coupon tags a youngster could use so it was standard procedure for ranch kids in the area, where Gooch feed was distributed, to collect feed tags from sacks purchased not only by their parents, but solicited from neighbors or anywhere that they were available.

From the start, the Red Circle sales were successful. People came from eight to ten states, with many arriving at the ranch a day or so early and camping out or otherwise enjoying the area. There were educational as well as fun programs for participants. The first sale attracted 360 registered bidders to vie for 10 steer calves, some Holstein heifers and several gilts. By the fourth sale in 1954, the offerings were 150 calves. In 1972, the last year of the annual event, attendance had reached 4,500 people.

"J.J.," as he was known, was active in his broad community, actively supporting Kansas Wesleyan, St. John 's Military School and Marymount. He donated the land to the City of Salina where the Community Theater now stands. His philanthropy toward Kansas State University was substantial. He supported the football stadium projects. He always supported the Animal Husbandry Department with money, land, cattle and opportunities for extra activities often held at the CK Ranch. He was co-chair of the building of the grain science facility and grain milling department at KSU (a world leader). There have been countless people through the years that have related stories on the help and support that he constantly gave to individuals that have gone unrecorded, because he wanted it that way.

In 1970, Mr. Vanier sold the major portion of his vast food manufacturing, processing and marketing facilities to Archer-Daniels Midland Co. of Decatur, Illinois. That sale did not include any of the farming and ranching operations.

John Vanier died of a stroke at the age of 83 years on February 20, 1980, while at his winter home in Phoenix, Arizona. Daughter Joyce, and sons Jack and Jerry, and their families, all have various ranching interests to carry on the legacy begun by John J. Vanier.