William Powell Lear is best known for designing and building the Learjet, the world's first cheap, fast, mass-produced business jet. He is also credited with inventing the car radio, the eight-track stereo tape player and cartridges, the autopilot for jet aircraft, the navigational radio, and the radio direction finder for general aviation aircraft. Lear founded and sold a number of different businesses and also held more than 150 patents.

Born on June 26, 1902, in Hannibal, Missouri, Lear was the only child of Reuben Marion and Gertrude Elizabeth (Powell) Lear. Leaving home with an eighth-grade education, Lear learned electronics as a World War I Navy radio operator. Lear began to apply his knowledge of electronics to aviation, designing and producing radio-operated direction finders and navigation systems, electronics, automatic controls and fluid handling devices. He started in business early, establishing Quincy Radio Laboratories in Quincy, Illinois, in 1922, and Lear Radio Laboratory in Tulsa, Oklahoma, in 1924.

While working for Grigby Grunrow in Chicago, he redeveloped the "B" battery to get rid of the hum in other B batteries. He joined with Paul Galvin Manufacturing Company, in 1930, to create the first working car radio. He later sold his radio and coil company to Paul Galvin, whose company would become known as Motorola.

In 1940, Lear introduced the Learmatic Navigator, an ultra-high frequency device enabling pilots to automatically hold a course by tuning in radio broadcasts of any kind. This invention won the prestigious Frank M. Hawks Memorial Award. From 1949 until 1962, he presided as Chairman of the Board of Lear, Inc. During his term, he moved to Grand Rapids, Michigan, because the wartime demand for his direction finders, actuators, and other components outpaced the capacity of his earlier plant. In Grand Rapids, Lear developed and tested the F-5 autopilot. This contribution won the prestigious Collier Trophy in 1949.

In 1962, his dream to build a business jet became a reality when he moved his operations to Wichita. On October 7, 1963, the first Lear Jet took off as did his main legacy in aviation history. In 1967, Bill Lear sold Learjet Industries to the Gates Rubber Company and bought land and buildings adjacent to a deserted air force base in Reno, Nevada. He wanted to produce a pollution-free automotive engine. After many months and millions of his own money, he came to the realization that while his engine was operationally successful, it was not as fuel efficient as a conventional engine. He then moved on to his next challenge and began development on a new plane called the Lear Fan.

On May 14, 1978, William Powell Lear succumbed to leukemia in Reno, Nevada. His family later spread his ashes over the Pacific Ocean. Today, the Lear Foundation is involved in theater activities, women in aviation, aviation-related activities, Corporate Angel Network, and the Kansas Aviation Museum. 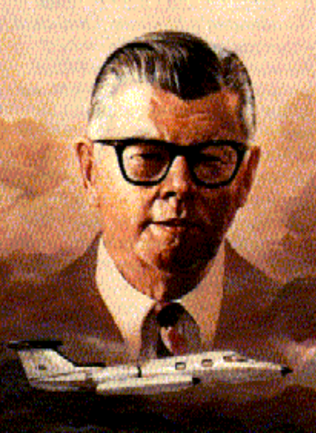