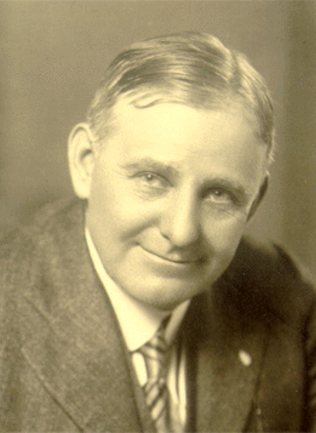 Born in Rocheport, Missouri, in 1864, Charles Quarles Chandler II moved to Elk City, Kansas, in 1883, to begin a career in banking that would span more than a half century.  When he died in Wichita in 1943, he was one of the wealthiest men in Kansas, and he left a legacy of a family of bankers who currently operate banks of their own and whose influence extends throughout the state.

Many people may be familiar with INTRUST Bank, but what may come as a surprise is the truly great Kansas story that provides the foundation these community banks are built upon.

Charles Quarles Chandler II descended from a family with deep English roots.  The Chandler name was prominent among the landed gentry in colonial Virginia as it had been in England.    Charles Quarles' grandfather migrated from Virginia to Missouri in 1836, and his father was a prominent physician in Rocheport, Misssouri, who died when his son was 12 years old.

Under the tuteledge of William Woods, an uncle who became president of the Bank of Commerce of Kansas City, Missouri, young Charles Quarles Chandler II was sent to Elk City, Kansas, to assess the banking opportunities in the south central Kansas community.  After engaging in banking in Elk City, Chandler moved to Medicine Lodge where he took charge of the faltering Citizens National Bank which he renamed the Citizens State Bank and transformed it into one of the strongest financial institutions in the region.  Chandler made substantial loans to ranchers in the region during the recovery of south central Kansas after the depression of the early 1890s.

During the late 1880s and 1890s, Chandler bought interests in banks in Ashlund, Meade, Liberal, and other communities in south central and southwestern Kansas and northwestern Oklahoma.  Chandler's reputation soon extended throughout the Kansas banking community, and his colleagues elected him president of the Kansas Bankers Association in 1900.  At the Association's meeting when he was elected president, he argued that state funds be placed in banks offering the highest interest rates in contrast to the state practice of limiting investment to Topeka banks.

Chandler developed the reputation of a sound manager.  He observed that banks with limited resources suffered more losses during periods of "bust" than they could recover from in "boom" times.   He advocated growth that contributed to stability of financial institutions.

There were at least 57 banks in 53 cities or towns in five southwestern states (New Mexico, Colorado, Texas, Oklahoma, and Kansas) in which Chandler personally had "been interested, both financially and responsible for the management."   According to business historian Billy M. Jones, "C.Q.'s object in each case was to provide appropriate financial services for the communities in which the banks existed, and to extend through resident bank presidents the type of personalized assistance which businessmen and farmers needed, given the requirements of the environment.   In those cases where the resources of the local banks were incapable of handling larger loan requests, those opportunities were referred to the Kansas National Bank in Wichita in an arrangement not unlike contemporary correspondent banking."

Chandler banks survived every business downturn, including the Panic of 1907 and the Great Depression in 1929 without experiencing failure.  Over the years, Chandler dismantled his community banks and, in many instances, members of the immediate family acquired them.

Chandler also invested in a grain merchandising operation, the Red Star Milling Company.  When he sold his interest in 1929, the new company that formed was General Mills, Inc.  In 1928, Chandler became involved with Northwestern Mutual Life Insurance Company as a member of the board of directors and served until 1942.

Chandler's philanthropy had an important impact on Kansas.  His daughter, Margaret, became ill from infantile paralysis in 1912. The experience of his daughter's condition had a dramatic impact on Chandler's life.  The family sought treatment which included care by an orthopedist in Philadelphia.  Chandler began to pay for the therapy of disabled children and an orthopedic clinic was established in Wichita with his assistance.  Eventually, Chandler broadened his vision of assisting disabled Kansas children by facilitating the creation of the Kansas Crippled Children Society in 1925.  Chandler was elected the first president.  In 1931, the legislature enacted a law supporting the Society's efforts.

Chandler left a legacy of one of the strongest financial institutions in Kansas and a family of bankers who inherited his commitment to proven banking practices and service to community to their respective communities and the State of Kansas.  His work with the "crippled children" of Kansas is a legacy that also survives.