A native of Allen, Kansas, Richard K. "Dick" Davidson started his railroad career as an 18-year-old brakeman/conductor with the Missouri Pacific in 1960.  He was appointed assistant trainmaster at Shreveport, Louisiana, in 1966.  He held various positions in the Operating Department at Fort Worth, Texas, Kansas City, and North Little Rock, Arkansas, before being named assistant to the vice president-operations in St. Louis, Missouri, in 1975 and vice president-operations in 1976.

Davidson is a director of Creighton University in Omaha and is on the board of trustees of the Boy Scouts of America. He serves on the U.S. Strategic Command Consultation Committee and is a member of the advisory roundtable for Nebraska Governor Mike Johanns. Davidson is on the board of directors of the Association of American Railroads, the industry's trade association in Washington, D.C. He also is a member of the Business Roundtable and is on the executive committee of the Center for Energy and Economic Development. In July, 2000, he was elected to the Board of Directors of the Malcolm Baldrige National Quality Award Foundation.

Davidson received a Bachelor of Arts degree from Washburn University in 1965 and has completed the program for management development at Harvard University.  He received an honorary degree in commerce from Washburn in 1994.  He has been a Washburn Endowment Association Trustee since 1996 and has served as the Development Committee chair. Davidson and his wife, Trish, are the parents of three children.<< Previous Page. 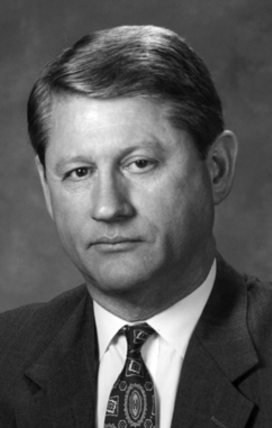