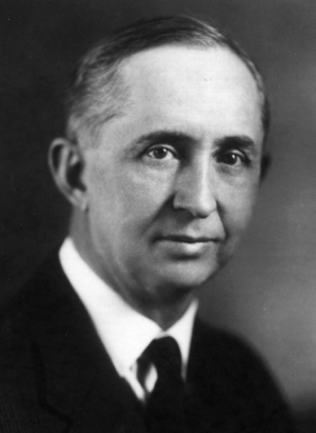 At the height of his power, C.L. Brown managed a multimillion dollar empire in telephone and electric utilities in Kansas. Hundreds of people in Colorado, Missouri, Indiana, Ohio, Pennsylvania, and New Jersey worked as telephone linemen, operators, and managers in companies controlled by Brown. These companies were the base upon which Sprint Corporation was built in later years.

Cleyson L. Brown was born February 3, 1872, in Adams County, Pennsylvania. He came with his family to Dickinson County, Kansas, in 1880. His father, Jacob Brown, was a miller by trade and obtained rights to a grist mill on the Smoky Hill River south of Abilene, where he ground grain and sawed wood for neighboring farmers. Ten-year-old C.L. Brown lost his right arm when he got his elbow caught in the grist mill machinery. Instead of using his hands to make a living as a farmer or a miller, he grew up as a young man looking for a business opportunity.   He was going to have to use his head to make a living, not his hands. After graduation from high school in Abilene, he taught in a country school, attended a two-year business school in Burlington, Iowa, and managed a creamery in Wichita before venturing into utilities.

At age 26, in 1898, the old grist mill his father had bought was remodeled to generate electricity for Abilene street lights. Abilene Electric Light Works was the opportunity for which he had been looking. He expanded first to serve local businesses and residents, then extended into other nearby communities.

United Telecom was founded in 1899, by C.L. Brown and Jacob Brown, to deploy reliable, reasonably-priced telephone service to the rural area around Abilene. At the time, Bell service was expensive and poorly managed in rural towns. The Browns installed their first long-distance circuit in 1900, and chartered their own company, the Brown Telephone Company, in October 1902. In March 1903, they joined with 14 other Kansas independents to incorporate the Union Telephone and Telegraph Company, which would provide long-distance service to Kansas City.

In September 1911, C.L. Brown consolidated the Brown Telephone Company with three other independents to form a new alliance and the second largest telephone company in Kansas, the United Telephone Company, which controlled seven major telephone exchanges. He formed United Telephone and Electric (UT&E) in 1925, in order to purchase stock in subsidiary companies across widely scattered geographical areas, eventually controlling more than 68 other companies. More than two-thirds of these were telephone companies.

C.L. Brown's consuming passion in his later years was the Brown Memorial Foundation, incorporated on November 15, 1926.

"All my wealth is nothing more than for service," Brown wrote, "and outside of enough to care for my family reasonably it all goes into this Foundation."

By 1930, the Browns had endowed it with more than $1,000,000 and the income from this was sufficient, at the time, to maintain its numerous activities. When asked why he established the foundation, Brown replied, "Every man tries to accumulate wealth and it's all to buy six feet of ground. Others enjoy the fruits of his effort and he never can see how much they enjoy it. But I want to see people enjoy mine while I am alive."

The Great Depression caused more than three million telephone subscribers to give up their phone service between 1931 and 1933. Consequently, UT&E suffered severe financial strain and had to seek protection to reorganize under the bankruptcy laws. All but six of his 85 companies, all battered by hard times, survived and some were showing profits again in 1936.   During the reorganization, a number of companies were merged and later phased out. The reorganization plan received final approval in late 1937. UT&E was dissolved, and its assets placed under the new company, United Utilities, Incorporated.

Much of the credit for the basic soundness of UT&E must go to C.L. Brown. Over 30 years, he had built a reputation as a competent telephone and utility manager. Later, in 1964, when Paul H. Henson, a 1995 KBHF Contemporary Honors Award recipient, became president of United Utilities, Inc., he almost immediately reorganized the company in accordance with C.L. Brown's belief that centralizing some of the company's functions would result in greater efficiency, cost reductions, and growth.

Unfortunately, C.L. Brown did not live to see the recovery and renewed growth of his companies. In the fall of 1935, he became ill and died on November 12.  C.L. Brown is buried on the grounds of the Memorial Park he developed in Abilene, Kansas.