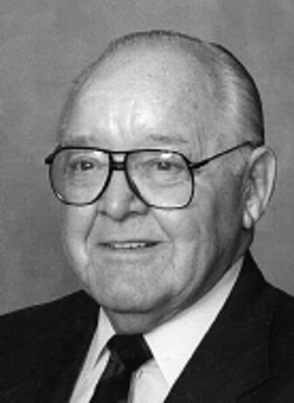 William Graves was born in Saline County, Kansas, May 23, 1914, on a farm near Mentor.  One of ten children, he has lived in Saline County all his life, with the exception of the three-and-a-half years he spent serving in World War II.

In 1935, Graves and his father started Graves Truck Line after the loss of the family farm crops, the result of the Depression and a succession of flooding.  The remaining source of income was the family truck, which the elder Graves and his sons used to haul crops and cattle to market for area farmers.

In 1939 his father passed away and Graves took over the truck line.  By 1946 he was elected President of Kansas Motor Carriers Association, and in 1948 he formed a corporation and included his three brothers in the family business.  Graves was president of the line from 1948 until 1976 and served as chairman from 1976 until his retirement in 1981.

Nicknamed "Mr. Transportation" by his peers in the trucking business, Graves guided his company as it grew into one of the largest regional motor carriers in the nation.  At the time of its sale in 1978, it was a multi-million dollar business.

Graves has remained extremely busy through the years, holding positions of service in many major trucking associations.  He also has served his community tirelessly, with much time and leadership donated to the Boy Scouts , Kansas Wesleyan University, the SalinaYMCA, and other state and local organizations.  Graves retains his reputation for honesty, common sense, and sound leadership.

Note: Mr. Graves son, Bill Graves, Governor of Kansas, 1995-2003, has agreed to head the American Trucking Association at the end of his current term, in January 2003, as President and CEO.