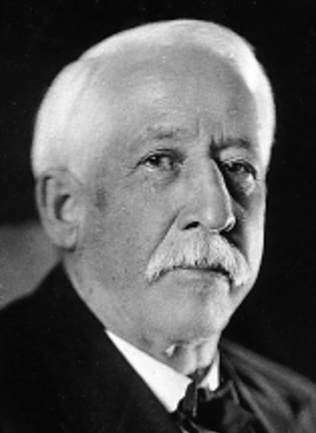 Mr. A.A. Hyde was born in Lee, Massachusetts, in 1848.  In 1865, he left Massachusetts and moved to Leavenworth, Kansas, with his brother. He was employed as a bank clerk until 1872, when his employer decided to send him to Wichita to assist in the opening of a new bank.  He remained with the bank until 1887, when he resigned and began to devote all of his energies to the booming real estate market.  However, when the "boom" collapsed, Hyde found himself busted and $100,000 debt.

Hyde, whose options were limited, entered into a partnership and created the Yucca Company (later to become the Mentholatum Company).  The Yucca Company produced and sold toilet soap in the beginning.  In 1889, Hyde bought out his partners and became the sole proprietor of the company.  The company's sales depended on word-of-mouth, the persuasiveness of salesmen, and the cooperation of druggists.  This proved to be successful, but Hyde was still always in search of new products.  It was at this time Hyde became intrigued with the properties of menthol.  Hyde developed the product known today as "Mentholatum."  Like many medical products during this time, Mentholatum was known to cure many ills.

It was Hyde's acumen as a businessman that led in large measure to the development and success of Mentholatum.  At no time during the early period of growth, however, did he link his name with the product.  Yet, the name of Mentholatum came to be indissolubly linked with that of A.A. Hyde.  So strong was this link that by 1915, the company adopted for its use as a trademark the facsimile signature of A.A. Hyde.

With the quick success of Mentholatum, Hyde soon realized he would become a wealthy man.  Hyde decided, due to perhaps his bad luck in real estate or his religious beliefs, to give away all of his money.  When Hyde passed away in 1935, it was clear that he had fulfilled the goal which he had set for himself.  He died without accumulated wealth.