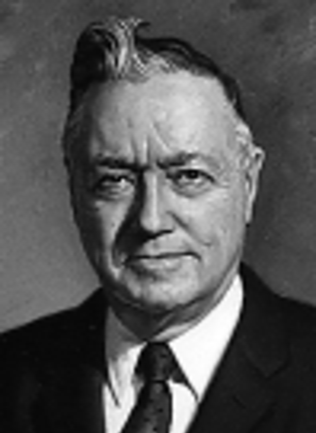 Harry Darby Jr. was an industrialist who was a major producer during World War II and political leader who was among those who convinced Dwight D. Eisenhower to run for presidency in 1952.

Darby was born on 23 January 1895 in the Strawberry Hill section of Kansas City, Kansas, the son of Harry and Isabelle Smith Darby.  His father had accompanied Darby's grandfather, Henry C.Darby, to the city on the Kaw River in 1869 from Washington.  The year that Harry Darby, Jr., was born, his father established the Missouri Boiler Works Company on West Fifth Street in Kansas City, Missouri.  He later relocated to Third Street and Minnesota Avenue in Kansas City, Kansas.

In 1911 at the age of sixteen, Darby began his career at the company and worked as a helper, mechanic, boilmaker, and structural ironworker before he became shop superintendent in 1917.  After graduation from local public schools he attended the University of Illinois where he received a bachelor's degree in mechanical engineering in 1917.  He was elected president of the student body during his undergraduate career.

When the United States declared war on Germany on 2 April 1917, Darby took his examinations early so he could graduate in time to enlist in the United States Army.  He served as a second lieutenant and later a captain in a field artillery battery. His unit fought in engagements from Chateau Thierry to the Soissons-Rheims line during the second battle of the Marne.  He later served as a major in the United States Army Reserves and a lieutenant colonel in the Kansas National Guard.  In 1917 Darby married Edith Marie Cubbison, his childhood sweetheart.  The couple raised four daughters, Joan, Harriet, Edith, and Marjorie.  Mrs. Darby became a lifelong companion in his civic and charitable efforts.  She died in 1986.

After the war Darby returned to work at the boiler company.  Following his father's death in 1923 he obtained a bank loan to buy the firm to found Darby Steel Company.  The company grew steadily until the Great Depression when he had to lay off half of his work force.  By 1938 he was able to purchase the bankrupt Kaw Steel Construction Company and form Darby Corporation that grew to be one of the largest steel plate manufacturing firms in the country.  During World War II the corporation built war materials, including bombs and amphibious landing craft.  At one stage during the war, these were launched on the Kaw River at the rate of one per day.  The company eventually floated 1,400 landing craft downriver to New Orleans for shipment overseas.  The Darby Corporation became a major wartime producer of locomotives and 1,000-pound (450 kg) bombs.  The Darby-built troop landing craft known as LCTs and LCMs were used in the invasions of Italy, occupied France, and the Pacific Islands.

Darby spent some time away from his business in the 1930's when he served as director of Kansas State Highway Department from 1933 to 1937 under his friend, Governor Alfred M. Landon, the Republican presidential candidate in 1936.  Darby was a major contributor to the Republican party for many years at the local, state, and national levels.  He was elected a delegate to six Republican national conventions from 1940 to 1960 and was a chairman of the Kansas delegation in 1948, 1952, and 1956.  He served as the party's national committeeman from 1940 to 1964 and was a member of the executive committee for twenty years.  He promoted the presidential campaigns of Landon in 1936, Wendell L. Willkie in 1940, and Thomas E. Dewey in 1944 and 1948.  Darby's friendship with fellow Kansan Dwight D. Eisenhower had the most lasting political and historical impact.  The two met during World War I and later continued their friendship.

Darby served for eleven months as a United States Senator from Kansas in 1949-1950, filling the unexpired term of Clyde Reed who died in office.  Darby did not seek election to the post.  Instead, he turned his energies to persuading Eisenhower to seek the presidency.  Darby won a reputation as a peacemaker among feuding Republicans.

Darby played a major role in the America Royal Livestock and Horse Show, serving as vice president for fifteen years , president for twelve years, and chairman of the board of governors for five years.  He played a key role in obtaining legislation to establish the national charter of the Future Farmers of America.  Darby actively ran a 1,500 acre farm in Wyandotte County, Kansas. He considered farming the basis of the Kansas City area economy and was avid in his support of agriculture.  Darby was given many awards and held several honorary degrees.  He was an Episcopalian and was listed in Who's Who in America as well as many other biographical dictionaries.

Darby's admiration for Eisenhower continued to the end of his life.  Darby was credited with raising the money to build the Eisenhower Library in Abilene, Kansas, and in 1985, at the age of ninety, Darby took a personal interest in the design of a statue of the former President that he contributed to the Eisenhower Center in Abilene.

Darby died on 19 January 1987 at Bethany Medical Center in Kansas City, Kansas, less than a mile from where he was born.  He was acknowledged to be a pre-eminent force in Kansas political and civic life and as an unassuming and gifted friend of national figures.  He made a lasting impact on his community through his unaffected kinship with people in all walks of life.