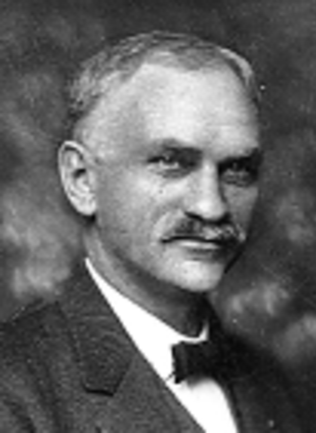 Charles H. Hyer, an Olathe boot maker, moved to Olathe in the 1870s, where they had hired him to teach leather working at the State Asylum for the Deaf and Dumb. He and his brother Ed opened a small shoe shop where, about 1880, they made their first pair of cowboy boots. Soon, Hyer Brothers (later Hyer Boot Company) was specializing in the manufacture of handmade boots. By 1919, the company had found a national reputation and was selling more than 15,000 pairs of boots a year.

Charles H. Hyer (1852-1921) not only was an expert shoemaker and successful business executive, but a man who took interest in his community and its progress. No other Kansas boot maker enjoyed the fame or produced boots on the scale of Olathe's Hyer Boot Company. This family enterprise gave Olathe one of its most prosperous industries and one of the unique manufacturing establishment of the state.

Charles H. Hyer came to Kansas from Illinois about 1876, and soon went to work for the Olathe School for the Deaf, where he trained students in shoemaking. Believing the town of Olathe could support another shoe shop, Charles sent for his brother, Ed, and helped him set up a business. The firm's first advertisement appeared in the Olathe newspaper in November of 1880. Olathe was close enough to the Kansas City stockyards that cowboy boots soon became Hyer's major product.

Charles became the company's sole owner when the brothers parted in the 1890s. He knew that to survive as a cowboy boot maker, he had to reach the western ranches. He began traveling to western shows, sales, and rodeos to take orders. The company's first mail-order catalog appeared in 1890. In subsequent years, Hyer became a leader in the mail-order business.

During the 20th century, Hyer was one of the world's largest manufacturers of cowboy boots. By 1919, the company had found a national reputation and was selling more than 15,000 pairs of boots a year. The business grew, and for some years enjoyed the distinction of being the largest handmade boot and shoe factory in the country, employing 70 workers.

After Charles H. Hyer died in 1921, his sons kept the company prosperous through boom decades and bad. The Hyer Company closed in 1977, but its legacy lives on in contemporary Kansas boot makers.

Hyer served as council member from the Second Ward for several years. He and other associates and business people were responsible for laying the foundation for a better and larger city through street paving and increased water supply. Hyer represented Johnson County for a term in the Kansas House of Representatives, was a member of the Kansas State Historical Society, and an official in the Presbyterian Church.