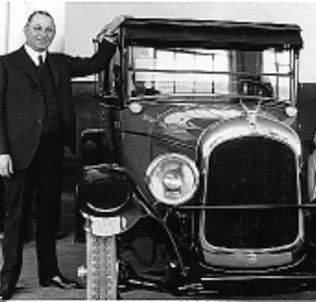 America's heritage is full of "rags to riches" stories about men and women who started with humble beginnings but, through hard work and perseverance, became enormously successful in their careers. Just such a Horatio Alger story can be said about auto maker Walter P. Chrysler, a Kansas boy who built the nation's third largest automobile company, the Chrysler Corporation.

Born in Wamego in 1875, Chrysler's family soon moved to Ellis, where he spent most of his spare time tinkering with small models of locomotive engines. His father was an engineer for the Union Pacific Railroad and, through his father's influence, Chrysler's fascination with engines grew. His first job was delivering groceries in town. From there, he became a janitor working in the Union Pacific Railroad shops for a dollar a day. He worked his way up as a locomotive mechanic and finally as a Works Manager for the American Locomotive Company.

His already successful career with the railroads soon changed into a career in auto building. In 1905, Chrysler bought his first car, which he immediately took apart in order to see how it worked. Realizing that automobiles could be vastly improved, he resigned from his position with American Locomotive and started to work with the Buick Motor Company in 1911. When Chrysler joined Buick Motors, they were turning out only 45 cars a day. Through his guidance and his plan for reorganizing the company, eight years later they were producing 600 a day.

Chrysler then moved on to the failing Maxwell Motor Company and applied his philosophies for reorganizing and improving production again. At the time, they were several million dollars in debt. Within seven years, mostly through his guidance, the company was 88 million dollars in the black.

Chrysler began his own company in 1924. It was soon successful enough to absorb Maxwell Motors and became the third largest auto maker in the United States. Walter Chrysler became a hometown Kansas boy that went on to enormous success. Kansans back home in Ellis and Wamego remembered him fondly, even years after he had left the Kansas plains. One Ellis man interviewed in the 1960's remembered Chrysler as simply a "hard worker and a good guy." Today, his boyhood home still stands in Ellis as a tribute to a young man who wanted nothing more than to work on engines but who became one of the pioneers of the American automobile industry.