“Nothing is really sold until it gives satisfaction.”  “Be a true brother to your employee and your fellow worker and he will do wonderful work under your captaincy.”  These mottos, among others, relay foundational philosophies on which William Coffin Coleman established and grew the Coleman Company, which is one of the most famous and successful manufacturers of camping and outdoor recreational equipment in the world.

Coleman was born in Chatham, New York, on May 21, 1870, to a young couple who later migrated to Labette County, Kansas.  Coleman’s father died when William was eleven years of age.  William worked to support his family, became a schoolteacher, and eventually enrolled in the University of Kansas School of Law.  Coleman ran out of money to finish his degree and became a traveling typewriter salesman, promoting his products in the southern United States.  According to Coleman Company history, while taking an evening walk down the main street in Brockton, Alabama, Coleman noticed the intense steady light of a gasoline-fueled lamp in a drugstore window, light which was superior to the flickering gas lights, smoky kerosene lamps, and dim carbon filament bulbs used in most homes and businesses of that era.

Thoroughly impressed with the quality lighting, Coleman arranged to sell the lamps manufactured by the Irby-Gilliland Company of Memphis, Tennessee, and returned to the Midwest, and began his new business venture in Kingfisher, Oklahoma.  Dismayed by initial slow sales, Coleman discovered the town’s shopkeepers had recently been swindled by another salesman who had sold them poorly performing lamps and then quickly left town.  Undaunted, Coleman offered to rent his lamps to shopkeepers for one dollar per week if they were satisfied with the lamp and serviced the products himself.  Rentals skyrocketed and Coleman broadened his lamp leasing business to surrounding communities, eventually establishing the Hydro-Carbon Light Company.

As demand for the lamps continued, Coleman borrowed funds from family and moved his company to Wichita, Kansas, in 1902.  He bought rights to the lamps, improved its design and efficiency and began marketing them as Coleman Arc Lamps.  Among other applications, the Coleman Arc lanterns lit the field for one of the first ever night football games at Wichita’s Fairmount College.  As design improvements made the lamps appropriate for outdoor use and in inclement weather, the lamps became popular with farmers and campers.  While growing his company, Coleman served as mayor of Wichita from 1923-1924.

Responding to the economic downturns of the Great Depression and the rural electrification projects of the Roosevelt New Deal programs, the Coleman Company continually developed new product lines, portable gas stoves, oil space heaters, and gas furnaces.  During World War II, the Coleman Company was called upon by the military to produce artillery shells, bomber plane parts, and, most notably, one million “GI pocket stoves” carried by American servicemen in Europe and in Asia.  Famous war correspondent Ernie Pyle declared the Coleman pocket stove and the Jeep to be the two most important pieces of noncombat equipment developed during the war.

The Coleman Company continued booming growth after the war, reaching $34 million in sales by 1950 and establishing manufacturing plants nationally and internationally.  From the early 1900s, Coleman initiated notable and ground breaking employee benefits for his workers, including reduced work days, from ten to eight hours; holiday pay; worker’s compensation; paid vacation days; continuing education classes at the plant; and profit sharing.  William Coleman was still active in his company when he died on November 2, 1957.  He was succeeded by his son and then his grandson as company executives.  The Coleman Company was eventually purchased by the Sunbeam Corporation in 1998. 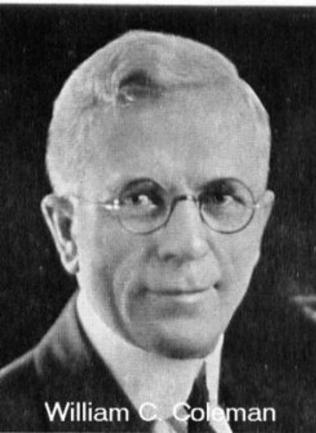