One of the first immigrants to Kansas territory after the enactment of the 1854 Kansas-Nebraska Act, visionary Cyrus Kurtz Holliday made enduring contributions to the settlement and growth of his new home state. Connecting towns from east to southwest, Holliday’s Atchison, Topeka & Santa Fe Railroad Company proved to be the nexus for regional economic development.  Born April 23, 1826, near Carlisle, Pennsylvania, Holliday graduated from college with the intention to practice law, but soon recognized his interest in and abilities for business.  After a brief venture into a partnership with a short line railroad company, making $20,000 when the business was sold to a larger railroading concern, Holliday determined better business opportunities were to be found in the West.

In June, 1854, Holliday wed Mary Dillon Jones and, in a few months, temporarily leaving his new wife in Pennsylvania, he traveled to and settled near Lawrence, Kansas, October, 1854. In December, Holliday and eight other men determined a site for a new “free state” community and organized the Topeka Town Association.  Serving as the Association’s first and only president, Holliday and the other founders negotiated land purchases and planned the layout of the new town, which incorporated on February 14, 1857, with a population of six hundred.

Between the years of 1859 and 1870, Holliday was elected to three non-consecutive terms as mayor of Topeka and served as Topeka’s delegate to the Wyandotte Constitutional convention, which determined the territory’s organization, its bid for entrance into the Union in 1861 as a free state, and established Topeka as capital city. In 1862, Holliday donated twenty acres for the site of the capital building grounds.  Also, during this period, Holliday helped found the Kansas Republican Party, served in the state senate and as Kansas’s adjutant general, recruiting soldiers and organizing supplies for the Union Civil War efforts.

Initiating his most indelible mark on the state and as a businessman, Holliday, in 1859, wrote a charter establishing the Atchison & Topeka Railroad Company, serving as its president and obtaining congressional land grants to construct a rail line which moved people and goods from Atchison, Kansas, on the Missouri River to Topeka. In 1863, with broader plans to extend the rail line through the state to the southwest by following the Santa Fe Trail wagon route, the name changed to the Atchison, Topeka and Santa Fe Railroad Company (AT&SF).  In 1880, rail line construction was completed to Santa Fe, New Mexico.  After stepping down as president, Holliday served twice on the AT&SF board of directors.

In an 1854 letter which represents a prelude description of his future life in Kansas, Holliday writes his wife, “A more lovely country I certainly never saw…Here, Mary, with God's kind permission, we will make our home; and I have every reason to believe a home it will truly be.” Holliday died March 29, 1900, and was eulogized two days later in his hometown paper, the Topeka Daily Capital, as the “‘author and finisher’ of Topeka…[which is]now his monument.” 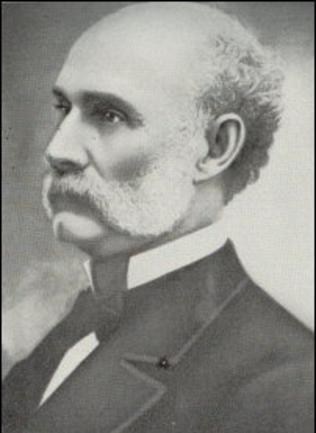