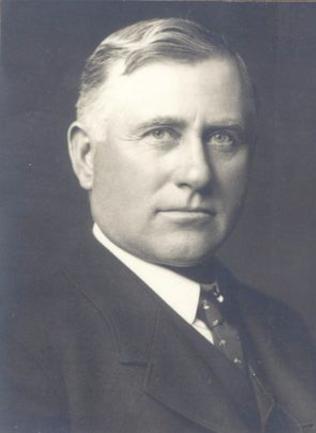 Two years after Bernhard Warkentin’s death, a statement by F.D. Coburn, Kansas State Board of Agriculture, was published in the May, 1910, Saturday Evening Post:  "Thirty years ago Kansas was not much of a wheat-growing state.... At the present time and for ten years past Kansas has led in wheat growing, and much of the credit for making Kansas a great wheat state belongs to one man, the late Bernard Warkentin, of Newton, Harvey County, Kansas. It was through his efforts that the variety which has made the Sunflower commonwealth famous and rich, known as Red Turkey, or Russian hard winter wheat, was introduced...."

Bernhard Warkentin was born June 18, 1847, in a prosperous Mennonite village in the Russian Ukraine.  In the 1870s, the Mennonites, who were pacifists, grew restless because a government exemption from military service would end in 1880.  Young Warkentin, son of a miller credited with turning the Ukraine into the breadbasket of Russia, left his home in 1871 for America, hoping to establish another successful wheat industry.  He traveled for two years through Canada, the Dakotas, and Minnesota with several fellow well-to-do Mennonites searching for suitable terrain to settle.  In Kansas, they found the ideal climate to grow Russian wheat, Turkey Red, a high yield hard winter wheat which would dominate the state’s wheat production for decades.  In 1873, Warkentin established his farmstead near Halstead and built Harvey County’s first grist mill.

Through the 1870s, Warkentin worked with Carl Schmidt of the Atchison, Topeka and Santa Fe Railroad Company to arrange purchases of rail line right of way property by thousands of Russian Mennonites immigrating to Kansas.  Flourishing communities and productive farmsteads took root throughout the central region of the state.

In 1885, Warkentin left the Halstead mill and, in 1886, established a flour milling and elevator company in Newton, Kansas. Warkentin commissioned his nephew, still in Russia, to buy and ship thousands of bushels of Turkey Red winter wheat to Kansas, to be distributed among the Mennonite farmers.  Soon the hard wheat crowded out the softer wheat varieties and became the crop that earned Kansas the nickname “bread basket of the world.”

Warkentin established the Newton and Kansas State banks and was a visionary leader in the founding of Bethel College in Newton, which is the oldest Mennonite college in the country.

On April 1, 1908, while touring through the Middle East with his wife, Wilhelmina, Warkentin sustained a gunshot wound when a firearm accidentally discharged on the train he was traveling. He died several hours later in a Beirut, Lebanon, then Syria, hospital.